No evidence of tuberculosis in badgers in the Netherlands 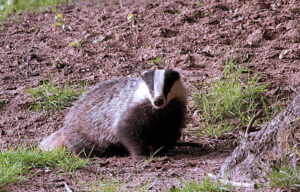 In the UK, thousands of cattle and badgers are infected with Mycobacterium bovis, a member of the Mycobacterium tuberculosis complex and the cause of  bovine tuberculosis (TB) in cattle. The prevention of TB in cattle is of great economic and public health importance and the role of badgers in disease persistence and transmission has long been a source of discussion in the UK.

The Dutch Wildlife Health Centre (DWHC) was established in 2008 in order to monitor the disease status of Dutch wildlife. Whilst there is no evidence to suggest that badgers in the Netherlands are infected with M. bovis, it is important to note that until 2012 badgers were rarely investigated. This is likely to be due to the fact that, excluding roadkill, few dead badgers were found. Whilst animals killed on the roads are not always the most representative subjects for ascertaining the health status of a population, they can be useful in assessing the prevalence of some chronic diseases such as TB. In 2012 the DWHC, in conjunction with several badger study groups, called on the public to report and submit dead badgers for post-mortem exam and TB screening. Results of this continuous screening shed light on the current TB status of the badger population in the Netherlands, highlighting potential risks to the beef and dairy industries.

One-hundred-and-four badgers submitted to the DWHC in the period between December 2012 and April 2014, were screened for the presence of members of the Mycobacterium tuberculosis complex. Approximately 80% of these were adult animals, with approximately even numbers of males and females. Animals were submitted from nine of the twelve Dutch provinces including: Drenthe (n = 4), Friesland (n = 1), Gelderland (n = 23), Limburg (n = 15), North Brabant (n = 54), North Holland (n =1), Overijssel (n = 2), Utrecht (n = 3), Zeeland (n = 1). Organ samples from each animal were tested at the Central Veterinary Institute of Wageningen-UR (CVI) for the presence of bacteria belonging to the Mycobacterium tuberculosis complex using molecular testing (PCR).  None of the animals were infected with bacteria belonging to the Mycobacterium tuberculosis complex; in these badgers, therefore, no evidence for infection with bovine TB was found. 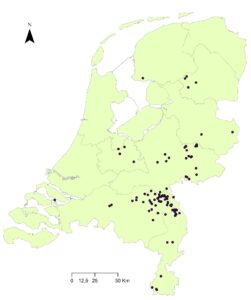