The DWHC regularly receives reports of or questions about deer with ‘bald spots’ (alopecia) or even almost entirely bald animals. This February two such animals were submitted to the DWHC for post-mortem exam.

Hunters tend to presume that such baldness is caused by mange caused by the mite Sarcoptes scabiei however there are multiple other possible causes of hair loss or altered hair growth, including other ectoparasites, hormonal problems, metabolic diseases or dietary insufficiencies. Demodex mites are often present in the hair follicles of many animals without causing disease, but in certain circumstances such as immune suppression, signs may develop. 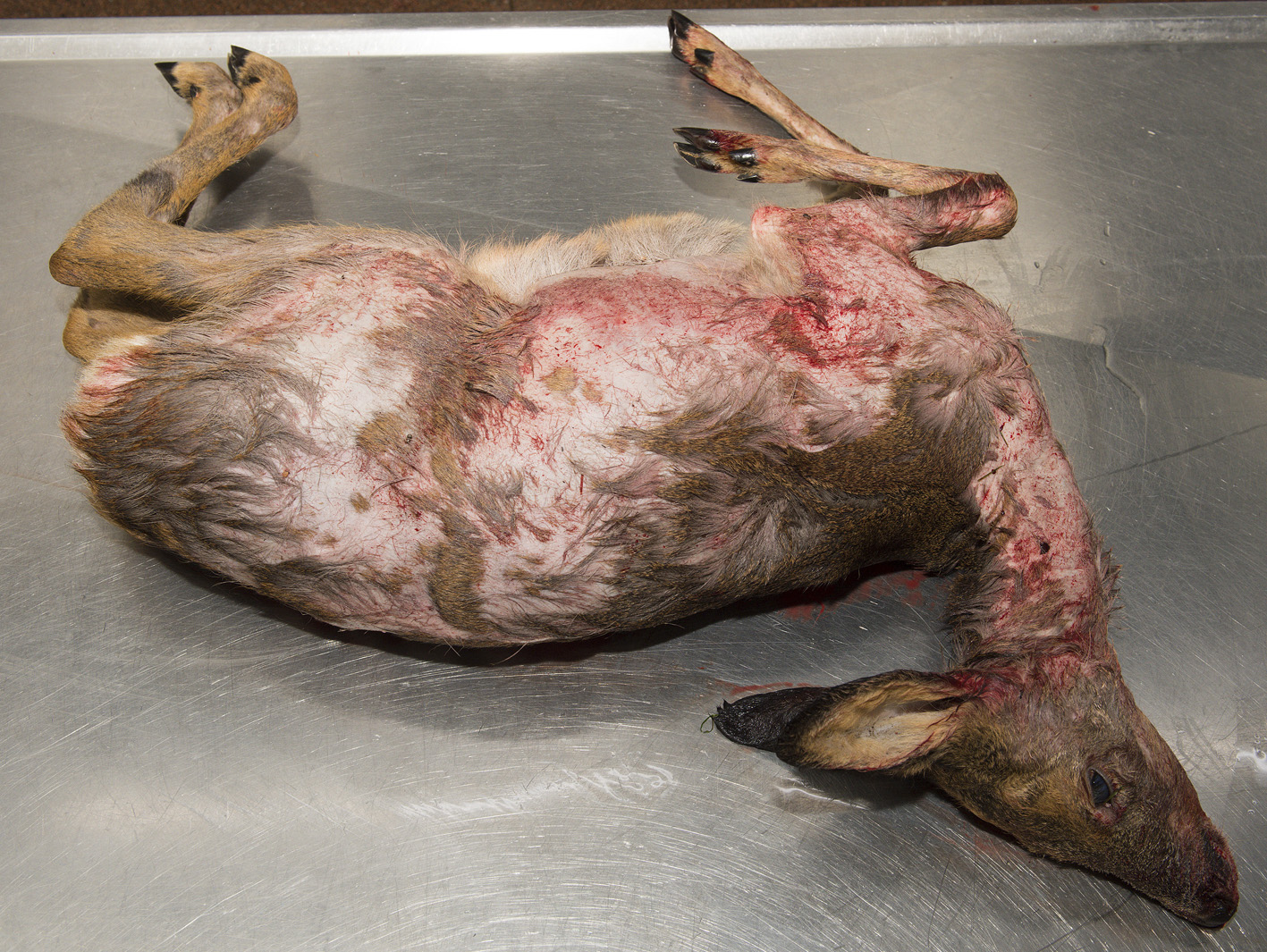 The two animals in this report, an adult female with bald patches and a fawn that was almost entirely bald (see photo), were culled in the Dutch province North Brabant. One of the hunters reported this being the second case of baldness that he had seen that year.

Roe deer with Demodex. The blood is not part of the pathological picture but an artifact from the shot wound.
Photo: Joop Fama

Post-mortem investigation revealed that both the local and extensive areas of alopecia were caused by Demodex mites. The condition is predominantly seen in young dogs and there are very few previous reports of it occurring in deer. The very first description dates back to 1886 in a sambar deer (Cervus unicolor) and in 1909 it was reported in a roe deer when the condition was named ‘Akarus-Räude’. More recently, demodicosis was identified in four severely alopecic deer in Belgium (Vlaanderen 2007) and latterly in England in three confirmed cases and in two almost entirely bald deer demodex was suspected but not further investigated (North Yorkshire 2010 and Somerset 2011). 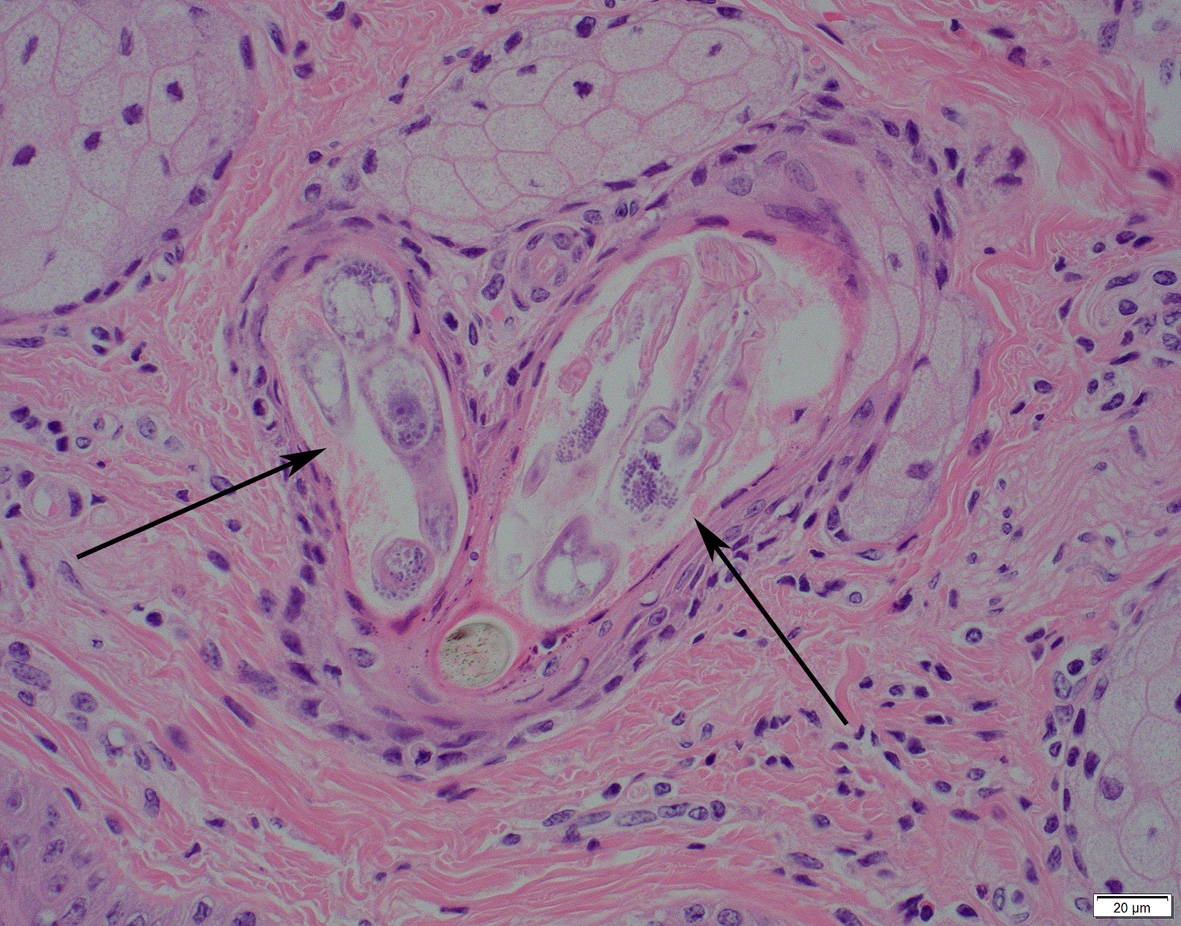 Demodex mites are commonly found in many species of animal, including man. There are several sorts of Demodex and these are thought to be species-specific although further information about the different sorts is scarce. Routine investigation into the cause of alopecia typically does not involve determination of the mite to the level of the species. The mites live in hair follicles and reproduce in the sebaceous glands. They can only survive on the surface of the skin long enough to travel between follicles and transmission between animals can occur in this way when there is close contact between individuals so as is seen, for example, between mother and calf.

Usually the presence of Demoodex mites does not cause any problems yet if the balance between the host and the mite population changes, for example if the host becomes immune suppressed, the mite population may grow and this can lead to the alopecia seen in these deer. The precise mechanism behind the hair loss is not fully understood but it is thought to be due to the swelling of affected sebaceous glands and hair follicles which causes the hair to fall out. It is also possible that the presence of the mites in the follicle impairs hair growth. Affected follicles may ulcerate and are liable to secondary infection with bacteria. Immune suppression can result when the immune system has to fight another disease process such as parasite infection; it can also be caused by general weakness secondary to stressors such as food-shortage, over-population, insufficient rest and bad (cold and wet) weather. These factors, stress, parasites and poor weather were proposed as the cause of demodicosis in the Belgian cases and, in Somerset overpopulation was believed to underlie the development of the condition. The cause of the cases in Yorkshire was not determined.

Despite being well-muscle, the fawn investigated by the DWHC, had few fat reserves, possibly as a result of a parasitic pneumonia caused by lung worm. The baldness extended over approximately 75% of the body; keds and ticks were also observed. These parasites are also commonly found in small numbers on deer but in sick animals numbers may increase leading to pruritis (itchiness) and irritation.

The doe investigated by the DWHC was moderately muscled with poor fat reserves and had encephalitis (inflammation of the brain) of unknown cause. The alopecia affected approximately 25% of the body. In 2013 demodicosis was reported in a pregnant doe submitted from an area in North Brabant in which overpopulation was thought to be a problem. This animal had extensive alopecia extending over both flanks.