Avian pox in a sparrow

At the beginning of January 2017 a sparrow (Passer domesticus) from the area around Soest was submitted to the DWHC. According to the individual who submitted the cadaver, before dying the bird had shown signs of sickness including fluffed up feathers, difficulty with flying, opening and closing the beak and appearing ‘snotty’. Further examination showed the bird to be in poor condition and that it had died from a combination of avian pox and a fungal infection. 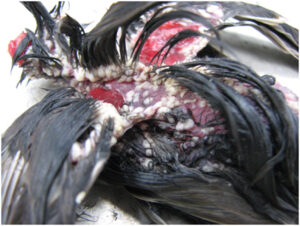 The multiple yellowish white lumps in the skin are visible here.

Initial examination of the cadaver (macroscopic) showed it to be emaciated and revealed the presence of large numbers of yellowish white lumps in the skin and on the beak. The lungs were covered by a layer of yellow material. The nature of the skin lesions was suggestive of avian pox and microscopic examination of the skin lumps showed inflammation associated with pox virus. The yellow material on the lungs was shown to contain fungal elements consistent with an infection with the Aspergillus fungus.

It was concluded that the bird, which was in poor condition, had died from a combination of avian pox and a fungal infection.

Avian pox (Avipoxvirus) is a member of the pox virus family of viruses (Poxviridae). The virus shows a high level of species-specificity and there are manydifferent sorts of avian pox virus affecting many different species of birds such as doves, crows and sparrows. The signs caused by infection with avian pox virus vary and two main forms of disease are recognised: In the dry form lumpy white lesions are seen on the skin, feet, head, beak and around the cloaca whilst in the wet form (also referred to as the diphtheritic form) it is the mucous membranes of the mouth, occasionally the crop, the windpipe and lungs that are covered by a yellowish material such as that seen in this case. Other DWHC case reports can be found here.

Avian pox virus only causes disease in birds: Humans, cats and dogs that come into contact with birds infected with this virus are not affected.