This page provides general information about this condition. Text can be revealed by clicking on the green headers. Links to press releases, results from DWHC investigations as well as other useful documents and relevant literature available on the DWHC website can be found at the bottom of the page.

Classic RHDV is almost exclusively found in wild and domestic European rabbits (Oryctolagus cuniculus) although there is one report of infection in an Iberian hare (Lepus granatensis). RHDV-2 also occurs in European rabbits and additionally in several species of hare including the Cape hare (L. capensis), Coriscan hare (L. corsicanus) and in 2014 in Germany, infection was also reported in two European hares (L. europaeus). It is unclear as to whether these species of hare act as a reservoir for RHDV.

RHDV is highly infectious and is spread via direct contact between rabbits or indirectly via contact with urine and feces from infected animals or contaminated food, water and bedding. In addition the virus can be spread by biting insects (flies and midges), and feces from carnivores that had eaten infected rabbits. The virus is very resistant and can survive for long periods in carcasses.

The map shows the geographic spread of the dead rabbits investigated by either the Veterinary Pathology Service Centre (domestic animals) or the Dutch Wildlife Health Centre (wildlife) and two additional cases from the GD Deventer and Harry Arts, Farmarts BV.

Up until March 2016 cases of RHD reported here were diagnosed using histology and molecular techniques (PCR) to identify the RHDV 2 serotype of the virus (negative for RHDV-1). After this time, diagnosis of cases was based on histology alone and positive cases are shown in light yellow on the map. Given the similar histologic appearance of these rabbits to those in which RHDV2 infection was diagnosed with PCR, it is presumed that the same virus serotype, RHDV2, was also the cause of disease in rabbits submitted for post-mortem after 2016. 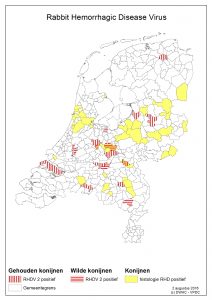 Domestic rabbits can be vaccinated against both serotypes of RHDV. More information for owners and rabbit sanctuaries can be found (in Dutch) on the University of Utrecht Vet School website.