This page provides general information about this condition. Text can be revealed by clicking on the green headers. Links to press releases, results from DWHC investigations as well as other useful documents and relevant literature available on the DWHC website can be found at the bottom of the page.

Tularemia, also known as rabbit fever, is caused by the bacteria Francisella tularensis of which there are four known sorts or subspecies. The most virulent, F. tularensis tularensis (also referred to as ‘type A’) occurs In North America. F. tularensis holarctica (type B) is found in the Netherlands and many other Northern-hemisphere countries.

Many species of mammals, birds, reptiles, amphibians, insects and arachnids (ticks) can be infected by Francisella albeit with varying susceptibility and effect.

Hares and rodents are particularly susceptible to infection by Francisella and may act as reservoirs for the disease.  Cats that eat infected animals have an increased risk of infection.

Hares with tularemia are typically weak apathetic and unsteady on their feet; during an outbreak in the Dutch province of Friesland in 2015 hares reportedly appeared ‘drunken’. They may show a reduced flight response and allow themselves to be caught.

The nature of clinical signs depends on the route and source of infection. For example, infection via the skin typically leads to the development of an ulcer a few days later often accompanied by swelling of the regional lymph node (i.e. lymph nodes in the elbow or armpit of the affected arm/hand, or in the groin of the affected leg). When infection is due to ingestion of the bacteria, the infection typically becomes established in the throat. Eye infection may result from rubbing the eye with a contaminated hand. Infection may be accompanied by fever and is usually treatable with antibiotics. More information about infection in people is available from the website of the Centres for Disease Control.

People can become infected via contact with animals but the bacteria is not transmitted from person to person. The most common routes of infection include: 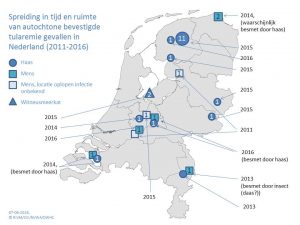 In the countryside protect yourself from biting insects with products or appropriate clothing. Gloves should always be worn when handling animal carcasses and wounds should be thoroughly disinfected and covered. Collection, preparation and consumption (including by pets) of ill or dead hares is strongly discouraged. Hunters should where rubber boots, disposable gloves and a single-use/washable overall when preparing carcasses and a face mask with FFP2 filter, especially if rinsing with water. Personal protective equipment should be disposed of or disinfected appropriately.