Yersinia pseudotuberculosis infection in a hare

In February 2011  an adult female hare which was in poor condition and had lost its flight reflex was euthanised and submitted to the DWHC for post-mortem investigation.

The hare was cachexic. Liver and spleen were enlarged and contained many white to yellow lesions of 1-2mm (Figure 1). The gastrointestinal tract contained green pasty material and there were red spots on the small intestine, and whitish spots on the cecum.

Many areas of tissue death (necrosis) were seen throughout the liver, spleen and peritoneal and inguinal lymph nodes. Groups of coccoid bacteria were seen at the centre of these areas (Figure 2). Hemorrhage and small groups of bacteria were seen in the adrenal glands. In addition, lungs were emphysematous. 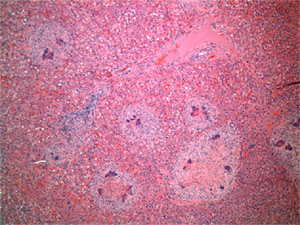 The bacteria Yersinia pseudotuberculosis was cultured from the liver and the antibiotic sensitivity of this strain was determined: sensitive to gentamicin, neomycin and tetracycline; partial resistance to trimethoprim + sulfamethoxazol and enrofloxacin; full resistance to penicillin and metronidazole.

The hare died from septicemia (blood poisoning) secondary to the severe, systemic infection with Y. pseudotuberculosis.