Toxoplasmosis in red squirrels, an update

In the summer and autumn of 2014 hundreds of dead squirrels were reported to the DWHC; observers described them as literally falling dead out of the trees. Investigations carried out by the Dutch Wildlife Health Centre (DWHC) and the Zoogdiervereniging (the Dutch Organisation for Native Mammal Research and Conservation) showed that the majority of these animals had died from toxoplasmosis. Albeit in smaller numbers, red squirrels continued to die from toxoplasmosis in 2015. Whilst toxoplasmosis is known to occur in squirrels it is thought that the large number of deaths seen in the Netherlands in 2014 has no precedent. Data from squirrel deaths in 2016 is being analysed and the impact of this potentially fatal infection on the population being assessed.

Despite a considerable decline in the number of squirrel submissions in 2016, toxoplasmosis (caused by infection with the parasite Toxoplasma gondii) continues to be recorded as a cause of death in these animals. In 2016 of the 21 reported dead squirrels 19 were submitted for postmortem investigation at the DWHC whilst in the preceding two years there were almost 400 reports and 74 dead squirrels were investigated. This decrease could be a result of reduced media coverage but may also reflect an actual reduction in the death rate; in any case we are no longer hearing accounts of squirrels falling out of the trees.

Toxoplasmosis is known by many as a disease that can be contracted via contact with cat litter as the feces of young infected cats is an important source of infection. Of the 19 squirrels investigated by the DWHC in 2016 at least five are believed to have died from toxoplasmosis. Whilst in absolute terms this is fewer than in 2015 when the number of submitted animals is considered the infection rates are comparable. In addition, two additional cases of toxoplasmosis were identified in 2016 however the infection was not thought to have contributed to the death of these animals. It is, therefore, clear that toxoplasmosis remains active in the Ducth red squirrel population.

Population dynamics of squirrels in the Netherlands

Between 1996 and 2015 there was a moderate decline in the squirrel population in the Netherlands.Theoretically population increase could be expected in the years following an autumn in which food (nuts and seeds) was abundant and the opposite when autumnal food sources were scarce. However, in practice this is not always the case: Whilst in years following a food-poor autumn numbers tend to be low, population peaks that may be seen following a food-abundant autumn tend to be relatively low.This suggests that other factors, such as disease, are likely to play a role in population dynamics.

The last notable drop in the Dutch squirrel population was seen following the food-scarce autumn and long, cold winter of 2012/2013. The recovery that was expected in 2014 after the autumn of 2013 in which food was abundant and the mild winter that followed, was not seen. It is possible that this was due to the toxoplasmosis outbreak that we documented in 2014. Similarly whilst the population in 2015 showed some signs of recovery this was also lower than could be expected given the favourable autumn and winter of 2014.

The DWHC will continue to monitor the Dutch squirrel population and to this end the results from the population counts in 2016 will soon be available. There was an abundance of oak and birch nuts in the autumn of 2015 and consequently it is expected that the squirrel population will show signs of recovery in 2016. However, the impact that toxoplasmosis could have on this recovery is still not known. In order to ascertain the role that disease (in particular toxoplasmosis) plays in population dynamics, the Zoogdiervereniging and the DWHC will continue to investigate cause of death in squirrels. We are asking the public to help by reporting finding a dead squirrel via the submission form on our website. For microscopic examination of these animals it is essential that the cadavers are in a fresh state i.e. not dead for more than one day; cadavers should not be frozen. It is therefore preferable to report dead squirrels (that are not obviously roadkill) as soon as possible and to keep the cadaver in a cool (not frozen) place until it can be collected. After submitting your form you will be contacted by the DWHC who will help decide whether the animal is suitable for submission and advise you on how to package the cadaver and arrange collection of the packaged squirrel from your home or place of work.

A map showing the distribution of the squirrels submitted in 2016 is available here:sterfte-bij-eekhoorns-update-2016

The work of the Zoogdiervereniging in investigating the cause of death in squirrels is made possible thanks to the Juncus Porzana Delichon Fonds and the Prins Bernhard Cultuur Fonds. 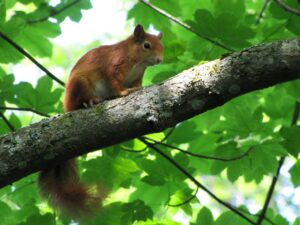