Second DWHC interim report on the investigation of hedgehogs 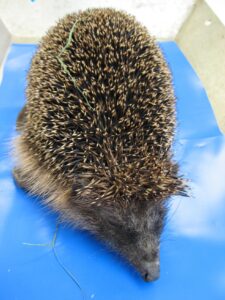 In the period from August to October 2019, twenty hedgehogs were sent to the DWHC, a subdivison of the Faculty of Veterinary Medicine at Utrecht University, for post-mortem examination. Seventeen hedgehogs were examined, three animals were too autolytic. Lung conditions were found in almost half of all examined hedgehogs. The causes of the lung conditions were diverse, such as lungworms, parasites (Toxoplasma gondii), bacteria (including Pasteurella sp.), and combinations of these. Salmonellosis was diagnosed in nearly 30 percent of the hedgehogs. The salmonella infection in these hedgehogs was caused by Salmonella group D. This bacterium is zoonotic and can therefore infect humans as well.

The bacterium Salmonella enterica is widespread in nature and can survive for months. This Salmonella bacterium has been detected in birds, mammals and humans. There are many different types (serovars) of this bacterium, altogether more than 2700. The different types are subdivided into groups. In literature the Salmonella types found in hedgehogs refer to groups B (S. Typhimurium) and D (S. Enteriditis).

Salmonellosis is known as an important disease in hedgehogs. An English study showed that salmonellosis was found in 30% of hedgehogs that were not killed by traffic. In a Norwegian study, different infection rates were found at four different locations (0%, 0%, 39% and 41%). In the German book “Igel in der Tierpraxis”, it is indicated that bacterial infections of the digestive system are primarily caused by Salmonella and E. coli bacteria. It is therefore not surprising to find this bacterium in Dutch hedgehogs.  Salmonella was diagnosed in five hedgehogs as the cause of death. However, an infection with Salmonella does not necessarily mean that the hedgehog will die. The bacterium can belong to the normal intestinal flora and be latent (dormant) in an animal. Therefore, testing droppings makes little sense. A positive result only indicates that the bacteria is present in the intestine, not whether it will also cause conditions for the animal. The use of antibiotics can even have a negative effect, because the normal intestinal flora will be disturbed.

The infection is transmitted to animals via contaminated food or water. The environment can become contaminated by excrement of carrier animals. In a Norwegian study, hedgehogs collected at a feeding place had a clearly higher Salmonella infection rate than hedgehogs collected elsewhere.
In addition to catching the bacteria via food or water, in literature it is also mentioned that fleas and the red slug (Arion rufus), may play a role in transmitting the bacteria to hedgehogs.

Humans can fall ill from a Salmonella infection. It is therefore very important that the necessary hygiene measures are always taken into account when handling and caring for hedgehogs. According to a report from the American CDC (Centers for Disease Control and Prevention), people can fall ill due to carelessness and poor hygiene. On their website the CDC wrote on October 2, 2019 that across the United States of America, 54 people had been infected with Salmonella by kept hedgehogs. Of these, eight people were hospitalized. Two outbreaks of salmonellosis in humans were also linked to hedgehogs in Norway. However, in these cases direct contact with hedgehogs was not always the case., Sometimes the contamination took place via the environment, which was an area with gardens containing a high density of hedgehogs, which were also sometimes fed. In both the American and Norwegian studies, the outbreak in humans was caused by S. Typhimurium (group B Salmonella).

The Toxoplasma parasite was also found in a few of the examined hedgehogs. Although this parasite is a zoonosis,  humans  cannot catch the disease just by coming in contact with the hedgehog. To become ill, undercooked hedgehog meat must be eaten.

The MRSA bacterium is a zoonosis as well. From research in other countries, it is known that MRSA is confirmed in hedgehogs. It is therefore important for people working in Dutch hedgehog rescue centres to know whether this bacterium also occurs in hedgehogs in the Netherlands, and if so, which variant. For this reason the RIVM is investigating hedgehogs  for MRSA. This investigation is still ongoing. The results will be included in the final report.

Even though three hedgehogs could not be examined (too autolytic), it was clear that one of them suffered severely from myiasis (fly-strike).
This disease, which is well-known among rabbit- and sheep farmers, is a serious condition. Especially in the summer, when there are lots of flies, this condition is frequently seen. Flies deposit eggs in wounds or in faeces that stick to the body, like diarrhoea. Maggots can then invade the body and “eat” the hedgehog from the inside. The rescue centre that had sent this hedgehog with myiasis indicated that they received several of these smelly hedgehogs in the summer. Unfortunately, such hedgehogs can only be saved in an early stage and all eggs and maggots must be removed with tweezers and the wounds should be thoroughly flushed.

The Dutch hedgehog population seems to be declining. However to be sure, more information about numbers and distribution is required. This year the Dutch Mammal Society declared the hedgehog ‘animal of the year’ and a Hedgehog-working group has been established. At the end of the year they hope to have worked out the data from the Hedgehog-counting weekend and hope to be able to tell how the hedgehog population is doing.

When handling dead and sick animals, the general hygiene measures (see https://www.dwhc.nl/en/faq/) must be observed.

Report ‘fresh’ dead hedgehogs (dead not longer than 24 hours) that are not found  the roadside, to DWHC as quickly as possible via the DWHC website (https://www.dwhc.nl/en/report/) so that the animals could possibly be collected for research. In the mean time secure them (do not store them in the freezer but in a cool place, possibly in the fridge ).

To gain a better insight into the total mortality, we ask you to also report animals that have been dead for a long time or road kills on https://waarneming.nl/.