The roe deer (Capreolus capreolus) was the ‘focus species’ of DWHC in 2018, which means that the DWHC aims to increase the number of submissions of roe deer in order to shed light on the most common diseases in this species. In 2018 in total 34 roe deer were submitted to the DWHC for post-mortem investigation. The animals were collected from all provinces except for the province of Groningen and the province of Flevoland. Of the 34 roe deer examined, 22 were female (2 calves, 7 yearlings, 13 adult animals) and 12 male (4 calves, 3 yearlings, 5 adult animals). Eleven animals were found dead, the other 23 were sick and / or dying animals that were relieved of their suffering.

Of the 34 roe deer examined, 21 had moderate (2) or severe (19) chronic pneumonia caused by lungworms.
In roe deer two types of lungworm can be present: the ‘large lungworm’ (Dictyocaulus eckerti) and the ‘small lungworm’ (Varestrongylus capreoli). Throughout the year lungworms can be found in roe deer. Due to the pneumonia the heart muscle is often thickened. This is a result of the increase of pressure in the lungs, so the right side of the heart has to work harder to pump blood through the lungs. It is often asked whether there may be a relation with lungworms in domestic animals. But the species of lungworms that are present in roe deer are different from those found in domestic animals such as cattle, sheep and horses.

The barber’s pole worm (Haemonchus contortus) was detected in seven roe deer. Unlike the lungworm, the barber’s pole worm is not found throughout the year. In the past, this worm was mainly found in the summer months of July and August, but nowadays the period is prolonged and infection is seen from May to October (website of the GDDiergezondheid, in Dutch).

The clinical signs are largely due to the blood-sucking nature of these worms with heavy infections resulting in anaemia. One worm sucks 0.05 ml of blood per day, which is why anaemia develops when large numbers of barber’s pole worms are present. In these seven roe deer the counts of barber’s pole worms (based on an estimation of a partial count) laid between 100 and 1800 worms per animal. The estimated maximum numbers per animal can vary greatly from year to year. If the infection is not serious, the blood loss can be compensated by the production of new blood cells. In general, gastrointestinal worms often cause diarrhoea in animals, but the barber’s pole worm does not cause diarrhoea. The barber’s pole worm is common in
sheep and goats.

To estimate the number of barber’s pole worms, the abomasum is flushed out. The worms are then clearly visible. Part of the “flushing” is counted. This is done with a stereoscope to see the difference between the barber’s pole worm and the other (red-coloured) worms. 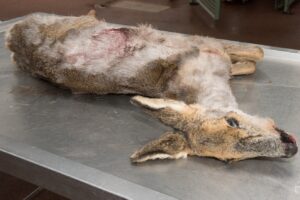 In two roe deer a tumour was found. One deer had a benign tumour in its mouth, the other animal had a breast lump caused by sweat gland cancer.

In addition, various inflammations were found, such as bacterial pneumonia caused by Trueperella pyogenes (one roe deer) and a severe chronic gall duct and liver infection caused by common liver fluke (Fasciola hepatica) (one roe deer). Brain inflammation (in two deer) and heart infection (in four roe deer) were also observed, but the underlying cause could not be detected.

Also the cause of (severe) diarrhoea and enteritis in three animals could not be determined.