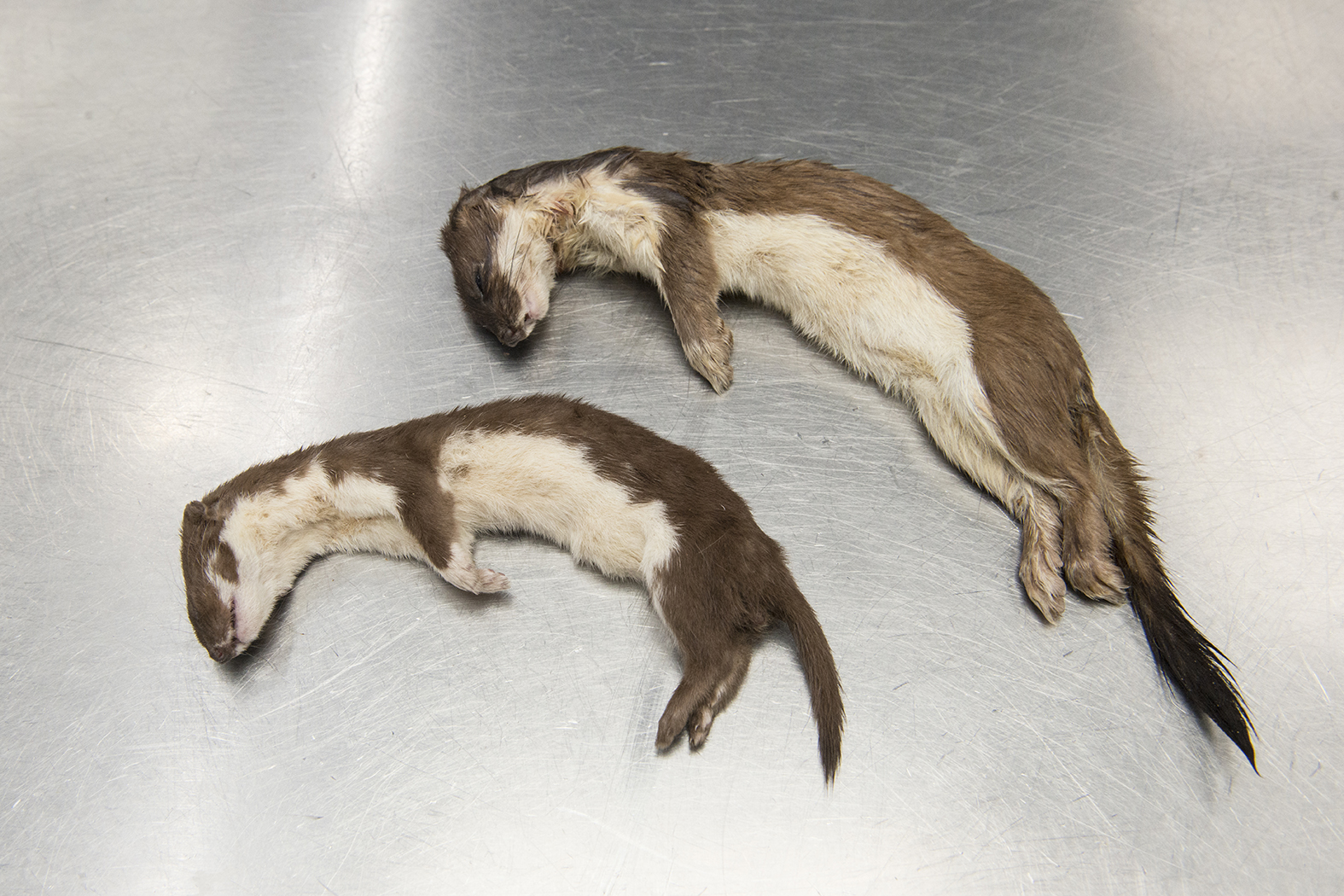 Stoat (above) and weasel (below). Photo: Multimedia department, Veterinary faculty

Little is known about the distribution, health status and causes of death in small mustelids in the Netherlands and for this reason weasels (Mustela nivalis) and stoats (Mustela erminea)  were made the DWHC focus species of 2017. In addition, the incidence of the roundworm Skrjabingylus nasicola  in the nasal sinuses of these species was also investigated.

In 2017, 31 dead weasels and stoats were reported to the DWHC and of these 17 were submitted for post-mortem investigation. These animals were found across the country (see map in Figure 1): The majority (15/17) had died as a result of trauma (traffic or predation); one animal died of disease and in another animal the cause of death could not be determined. 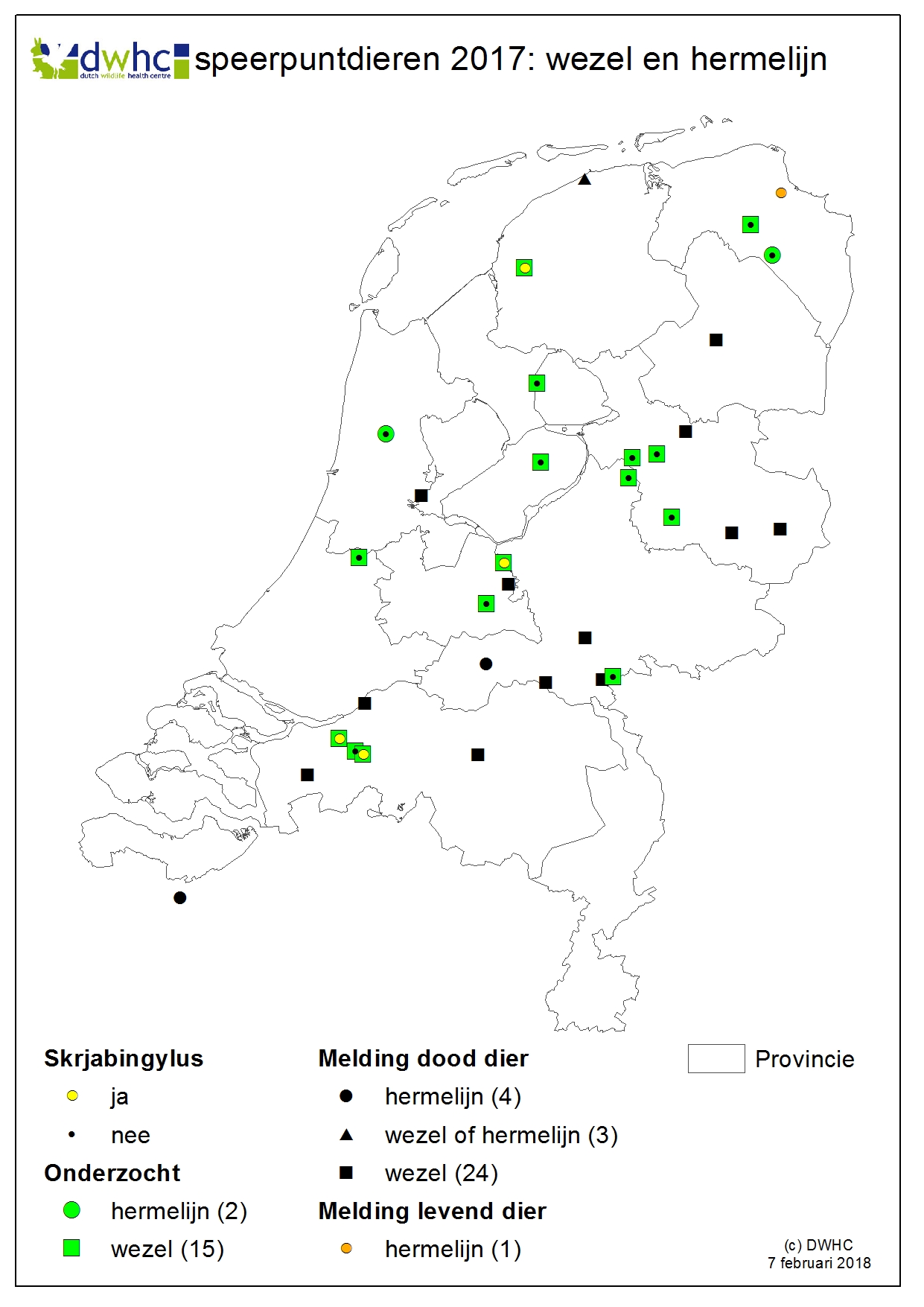 Figure 1: Overview of the locations of the reported and post-mortemed weasels and stoats 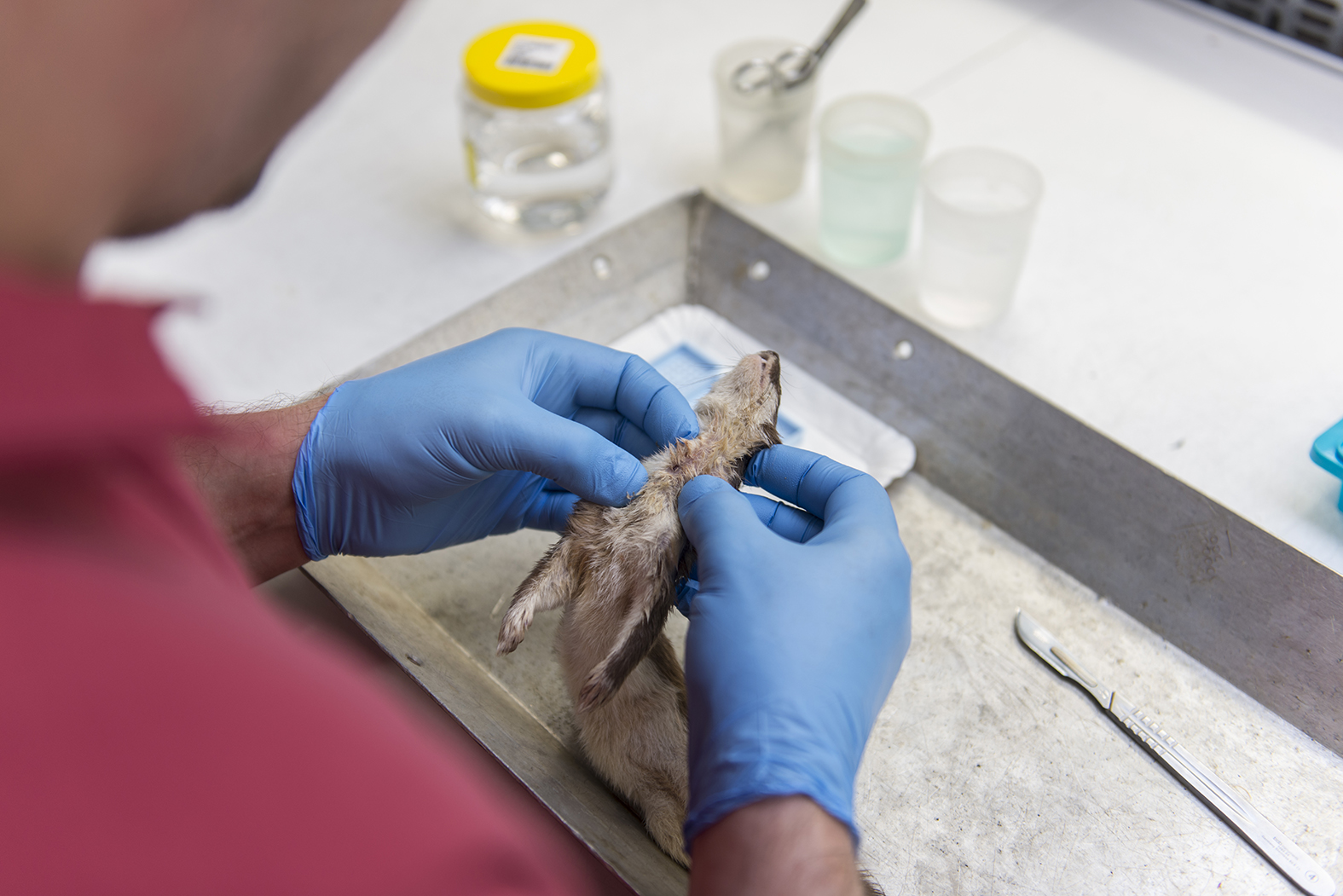 Coccidiosis was diagnosed as the cause of death in one weasel, an adult male. This disease is caused by the single-cell intestinal parasite belonging to the genus Eimeria.

The majority of trauma-related deaths were caused by predation (87%). The injuries in the other cases (13%) were thought to be consistent with traffic accidents (see Table 2). Trauma may occur as a result of underlying disease: For example, a sick animal is more likely to be caught by a predator or run-over. Of the 15 animals that died from trauma, inflammation was seen in the lungs of two weasels, the heart of a stoat and the brain of a third weasel. Realistically, only in the animal with the brain inflammation was the chance of trauma increased due to the inflammation. It is possible that the weasels with pneumonia were weakened but the role that the heart inflammation  may have had in the traumatic cause of death is not clear.

Both the post-mortem report and information provided by the people who submitted the animals can help to shed light on which predators were involved in the deaths of these animals. One submitter described how a dog had killed a weasel and seven other submitters reported that the animals (six weasels and one stoat) had been killed by cats (in two cases it was not clear if the cat had killed the anima lor  found it dead). One of these weasels had just climbed out of a drain in the garden and another was possibly weakened by a lung worm infection. In two weasels and the stoat the perforated skin wounds seen on post-mortem exam are strongly suggestive of these animals having being killed by a cat. Two other weasels had perforated skin wounds to the throat, indicating that they had been predated by a mammal. The weasel with the brain inflammation had been  caputured by a bird of prey; the chest of this animal was open and the heart and lungs were missing. Furthermore the diaphragm was ruptured and it appeared that an attempt had been made to eat the liver. It was not possible to determine which animal had caused the puncture wounds in the chests of the remaining two weasels. 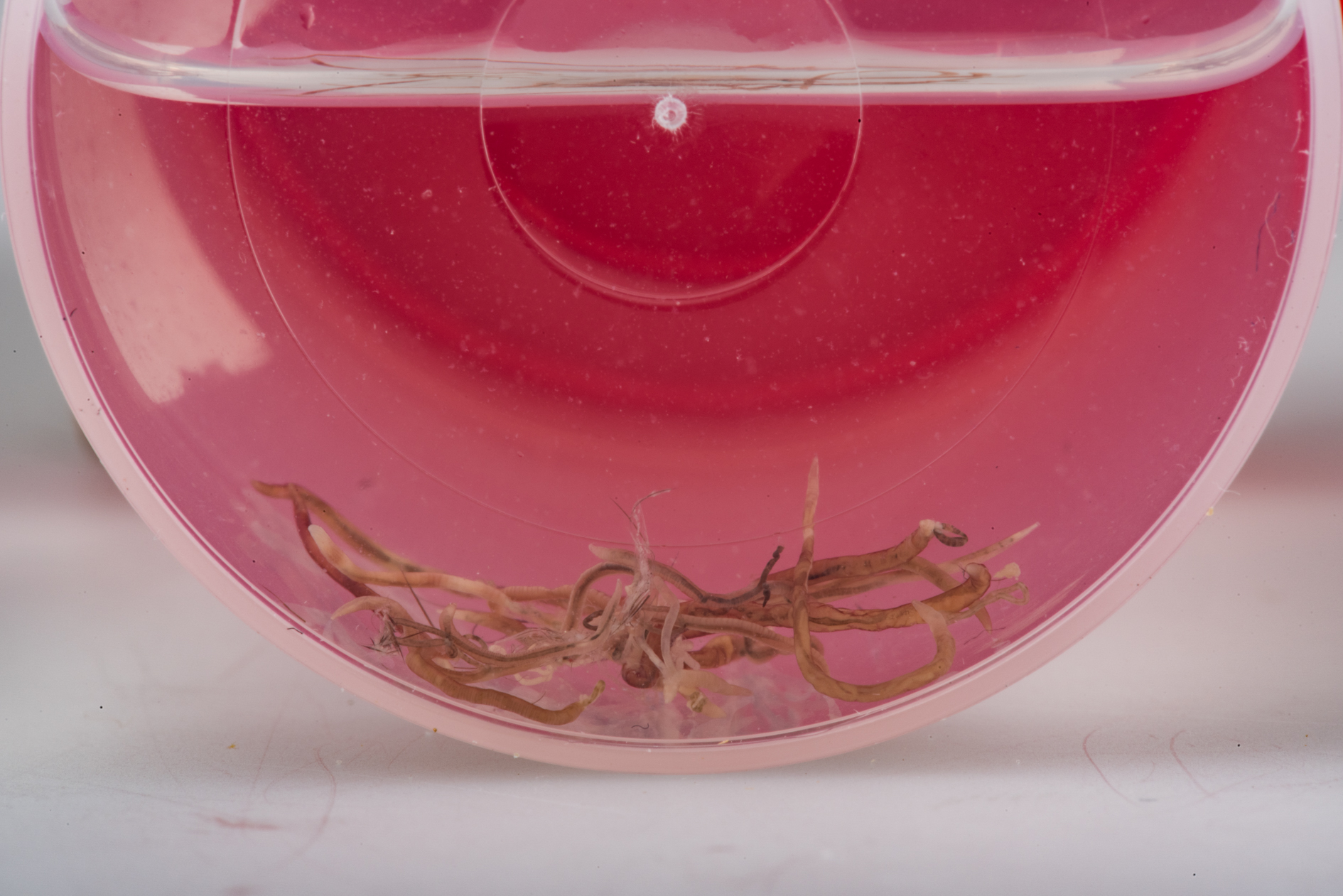 The round worm Skrjabingylus nasicola was seen in four weasles (24%). No abnormalities were seen in the skulls of these animals and the impact of the presence of this parasite in the nasal sinuses on the health status of the host is not clear. In a previous study carried out in the 70s (Van Soest et al,. 1972) in which the skulls of 203 weasels and 345 stoats were exmined, 56% of the weasels showed skull abnormalities caused by this round worm.

All of the stoats and the majority of the weasels reported to the DWHC were found within the known range of these animals according to the NDFF-map for the period 2010-2018 (see Figure 2). A single weasel had been found in an area in which these animals had not been seen since 2010 (see Figure 3). 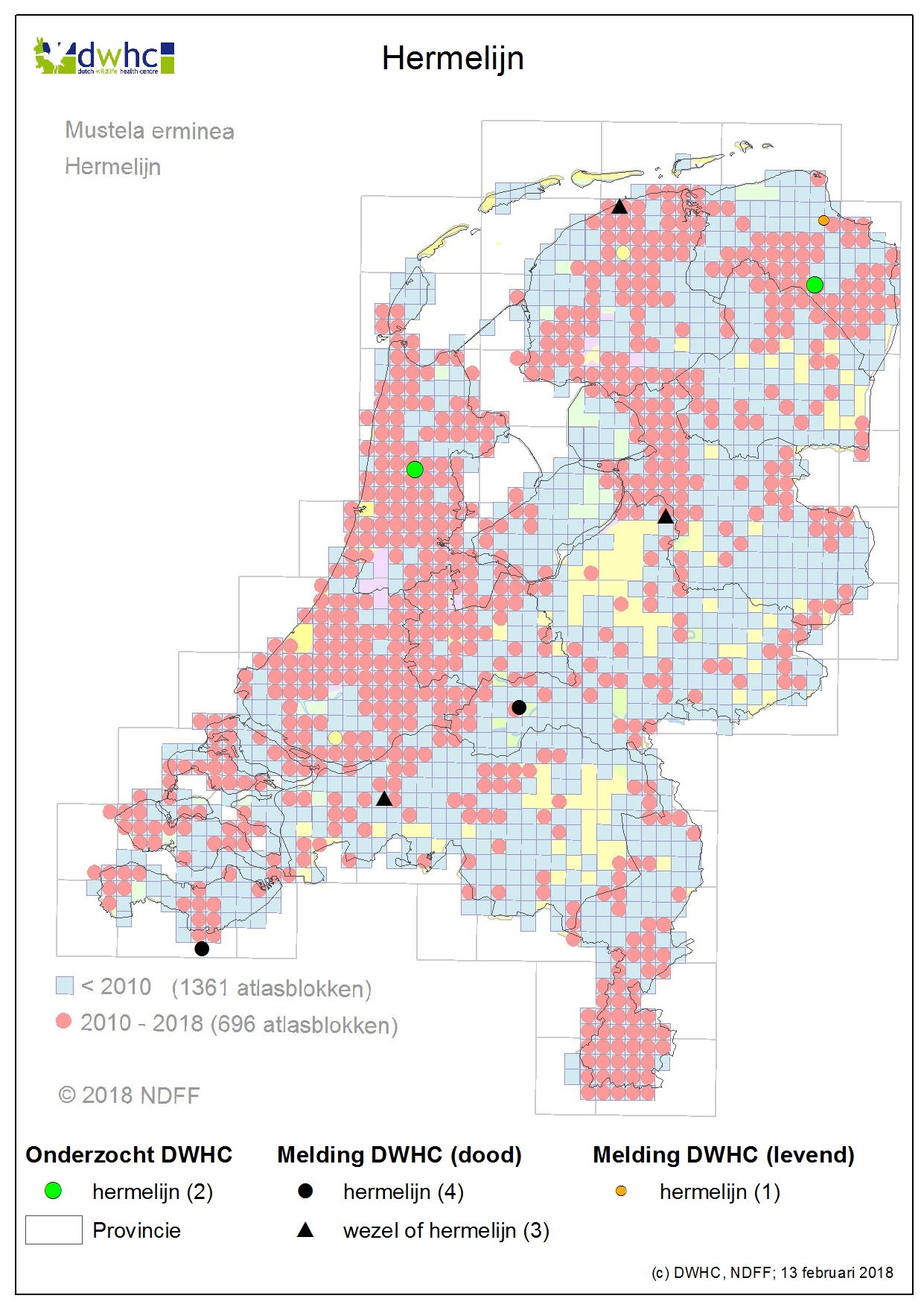 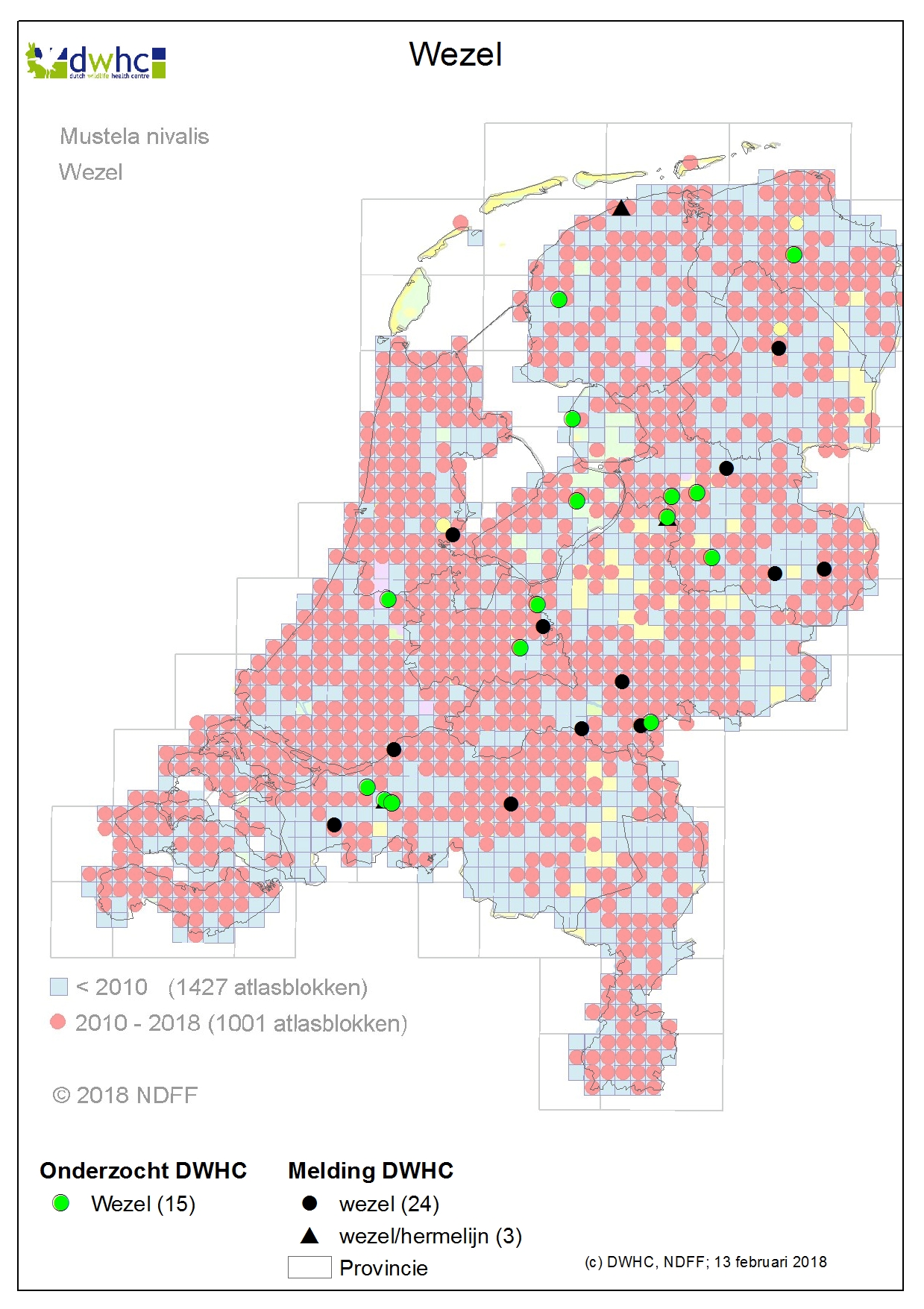