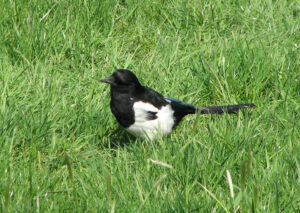 In May 2018 a sick immature Eurasian Magpie (Pica pica) was brought to birdhospital Naarden where it died. The fresh cadaver was submitted to the DWHC for post-mortem investigation. The manager suspected that the magpie had died due to the disease ‘pigeon canker’. Post-mortem investigation confirmed that the magpie had died of inflammations in the mouth and oesophagus which were caused by the parasite Trichomonas gallinae. 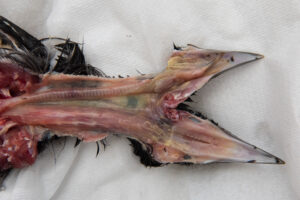 Necropsy of the magpie. Photo: DWHC

The disease that is caused by the parasite  Trichomonas gallinae is ‘Pigeon canker’, and also known as trichomonosis and trichomoniasis. This disease is mainly seen in doves, greenfinches, and birds of prey that eat sick birds, and it is not dangerous for people, dogs or cats.
The parasite causes inflammations in the mouth, throat, crop, and oesophagus. This makes the bird unable to take in feed and water, causing the bird to starve and sometimes choke. The course of the illness can progress quite rapidly. There is often a yellow-white, pasty substance in the mouth, although other diseases might have a similar appearance, such as avian pox. Only investigation can confirm the cause of disease. 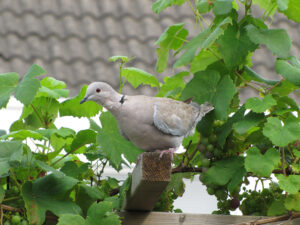 As mentioned above, ‘pigeon canker’ is mainly seen in doves, greenfinches, and birds of prey that eat sick birds. Despite the known fact of its appearance in birds of prey and scavengers, trichomonosis is usually described as a disease of pigeons and greenfinches. In previous years, DWHC found the Trichomonas-parasite as the cause of disease in the following predatory birds:  immature magpies,  immature sparrow hawks, and in an adult hawk. In songbirds, the greenfinch is most susceptible, the common chaffinch is less susceptible and the disease is sporadically seen in hawfinches, Eurasian siskins, and in house sparrows. DWHC found the disease in multiple pigeon species, being Eurasian collared doves , common wood pigeons , stock doves, and feral pigeons. The -increasingly rare- European turtle dove has not been submitted to DWHC for post-mortem investigation yet, although it is known that ‘Pigeon canker’ causes death in this species. 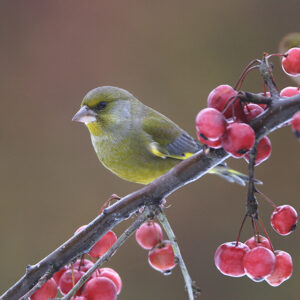 Did you find a dead bird? Report them through the website of DWHC or Sovon ( Dutch). This is the only way to get a good insight in the mortality of birds through the years.