Highly pathogenic H5N8 in waterbirds in the Netherlands

On the 10th of November Wageningen Bioveterinary Research (WBVR) reported that the bird flu detected earlier this week in tufted ducks and great crested grebes in the Netherlands belongs to the highly pathogenic H5N8 form of the virus. 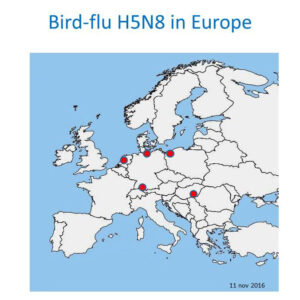 This week the death of many tufted ducks and great crested grebes in the Monnickendam area of North Holland was reported via the joint Sovon/DWHC bird death phone-line. It is now known that they were infected with the highly pathogenic form of the bird flu virus, H5N8 which has been identified in several places across Europe over the last week.

This report of the death of multiple waterbirds was received via the phone-line jointly operated by Sovon and the DWHC.

As the report concerned more than three waterbirds at the same location The Netherlands Food and Consumer Product Safety Authority (NVWA) was informed. This government ministry is responsible for the investigation of so-called Notifiable diseases and accordingly arranged for the collection and further investigation of the carcasses which was carried out at Wageningen Bioveterinary Research Lelystad; this is a reference laboratory for bird flu (avain influenza).

This case illustrates the importance of reporting unusual deaths in wild animals in order to facilitate the detection and monitoring of infectious disease. The results indicate that there is currently an increased risk to the Dutch poultry sector and allow the governing authorities to take the preventative measures necessary to avoid the introduction of this disease to farmed birds. The secretary of state has issued an order for keepers of poultry and other captive birds to keep their birds indoors, or take appropriate steps to keep them separate from wild birds.

In order to continue the nation-wide monitoring of bird flu it is important that members of the public continue to report findings of dead wild birds. In line with EU testing recommendations Sovon and the DWHC are particularly interested in reports of the death of  certain species of birds including ducks, geese, swans, great crested grebes, herons, seagulls, waders, coots and other species of marsh and wetland birds, as well as members of the crow family and birds of prey.

It is necessary to report the finding of three or more dead waterbirds (e.g. ducks, geese or swans) in the same location directly to the NVWA (045 – 546 31 88). In order to help us to keep track of the current situation regarding bird flu in the Netherlands we ask that you also report this finding to us (Sovon / DWHC), and mention that you have previously informed the NVWA.

If fewer than three waterbirds or other species of bird are found then please report these deaths directly to Sovon/DWHC.