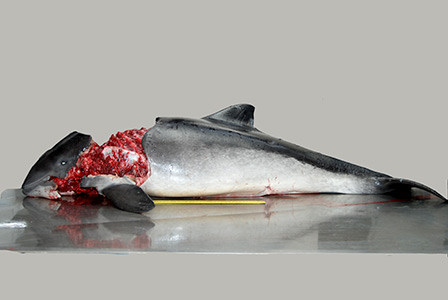 The mystery of the severely wounded harbour porpoises has been solved thanks to researchers working at the University of Utrecht Veterinary School’s Pathology Department in conjunction Imares Wageningen UR and the NIOZ. Microscopic analysis of the bite wounds showed that the porpoises were alive when the wounds were inflicted. It has previously been postulated by researchers in this field that the bites were caused by grey seal attacks. This research provides the molecular evidence (DNA analysis) to support the theory.

This work was published in November 2014 in two scientific journals

These findings are further supported by the recent films of grey seal attacks on harbour porpoises made by the German photographer and diver Uli Kunz. You can watch these on the website van National Geographic.