First case of RHDV-2 in a hare in the Netherlands 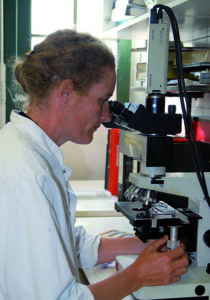 Microscopic evidence of acute inflammation of the liver and spleen. Photo: Multimedia, Faculty of Veterinary Medicine

For the first time in the Netherlands, RHDV-2 (Rabbit Haemorrhagic Disease Virus) has been confirmed as the cause of death in a hare. The animal was found dead on the territory of the Wildlife Management Unit in Aalten on the border between the municipalities of Aalten and Winterswijk. The cause of death was severe acute inflammation of the liver and spleen and RHDV-2 infection was confirmed with viral testing (PCR) by Laboklin in Hoensbroek

RHDV-2 is a sub-type of RHDV which is the cause of viral hemorrhagic syndrome (VHS), a disease that can lead to mass die-offs in rabbits (Oryctolagus cuniculus). Another subtype is the classic RHDV, also referred to as RHDV-1.

Whilst RHDV-1 has been present in the Dutch rabbit population since the start of the 1990s, RHDV-2 was only recently (2015) detected for the first time here. This latter sub-type is a relatively new virus that was discovered in France in 2010 and has subsequently spread across Europe. Although the two sub-types are related immunity to one does not provide cross-protection against the other. For this reason, many pet rabbits that had been vaccinated against RHDV-1 have died from infection with RHDV-2. 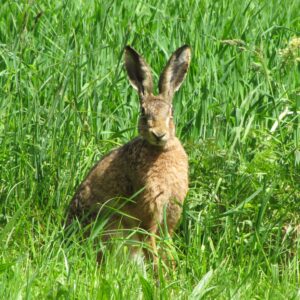 Classic RHDV-1 is primarily a rabbit virus and infection has only once been detected in an Iberian hare (Lepus granatensis). In contrast, there have been numerous reports of fatal RHDV-2 infection in hares. To-date it seems that infection of European hares (Lepus europaeus) with RHDV-2 represents a ‘spill-over’ from the rabbit population and typically only individual cases are reported (Australia, Germany, Italy, Spain). The situation in France is different with 40 cases already confirmed from 25 different outbreaks across the country.The strain of virus identified in these animals was the same as that isolated from rabbits dying in the same areas.

According to the submitter, hare numbers in the area where the dead RHDV-2 infected Dutch hare was found, have not been affected and no increase in death rate has been observed. A dead hare found 1.5km away could not be investigated due to the poor state of the cadaver.

The rabbit population in this area is very low following the death last summer (2016) of the majority of young animals; reports of sudden death were consistent with RHDV infection. The situation was compounded by a myxomatosis outbreak in the adult animals starting in September and persisting through till January.  Whilst myxomatosis has previously been observed in this population during the autumn months death rates had not previously reached the levels seen in 2016. These events have resulted in an estimated population size of approximately 10% of that of last year.

This virus is highly infectious: Rabbits and hares can become infected through direct contact (animal to animal) and indirectly via contact with urine and pellets from infected animals or via infected water, food, fur, bedding or hands. Infectious virus particles have even been isolated from the feces of predator species that have eaten infected rabbits. Insect vectors such as flies can also transmit the virus between animals. RHDV is not infectious to other other pets such as cats, dogs, guinea-pigs or other rodents. Pet rabbits can be vaccinated against RHDV.