Press release from the University of Utrecht

Researchers from the veterinary faculty at the University of Utrecht have found acute bleeding, consistent with bruising, in the 17m-long rorqual that stranded at the Dutch coastal town of Scheveningen. The presence of bleeding in various tissues that were examined under the microscope demonstrates that, as previously suspected, the animal was alive when it received a hard blow, most likely from a ship. 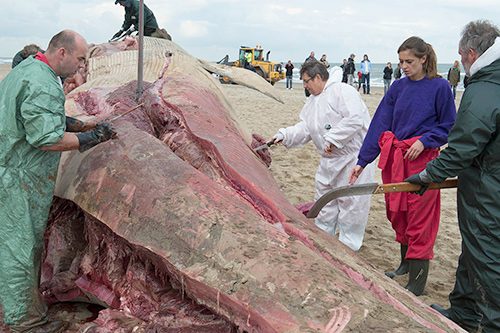 It became evident during the autopsy that the rorqual had probably suffered a sudden death namely by the presence of food in the stomach (indicating that it had recently eaten) and the fact that it had a good nutritional status. The  location and extent of the bruising are consistent with their being caused by collision with a ship. Examination of the liver under the microscope revealed a number of abscesses that contained the remains of parasite eggs. The presence of fungal or bacterial pathogens in the abscesses is being investigated. It is possible that the pathology in the liver may have weakened the animal making it more vulnerable to collisions.

Although the advanced state of decomposition of the organs makes interpretation difficult, no abnormalities were seen in the lungs, heart, stomach, intestines or spinal cord. There was mild and probably subclinical mineralisation of the kidneys. Further tests on the gut contents will be performed by researchers from IMARES, part of Wageningen University and Research Centre.

The broken vertebrae, state of decomposition and location of the stranding all suggest that the creature had been struck by a ship and carried on the bow into Dutch waters. In the last three years, a rorqual has been found on the bow of a container ship in the harbour of Rotterdam annually. Post-mortem was also performed on these animals and showed that, at is believed to be the case in this latest incident, the collision occurred while the animal was allive. Each case involved young rorquals and occurred in the summer months; whether or not this is coincidence or a developing phenomenon has yet to be seen. 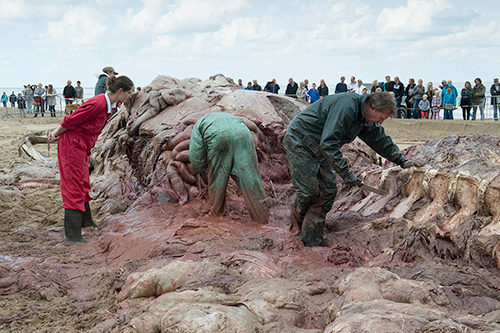